Please see special event on JAN 29!
The trial for The Seattle Six starts

Thursday January 30, 2020
9:30 am
Please help us raise defense funds at GoFundMe
(watch this page for any change of date or time)

at the US District Court for the Western District of Washington

For folks who come late and/or don't want to hassle security:
There will be a press conference in front of the court house before & after

Please help us raise defense funds by contributing at
GoFundMe
(you can also go to our GoFundMe using tinyurl.cm/DefendTheSeattleSix) 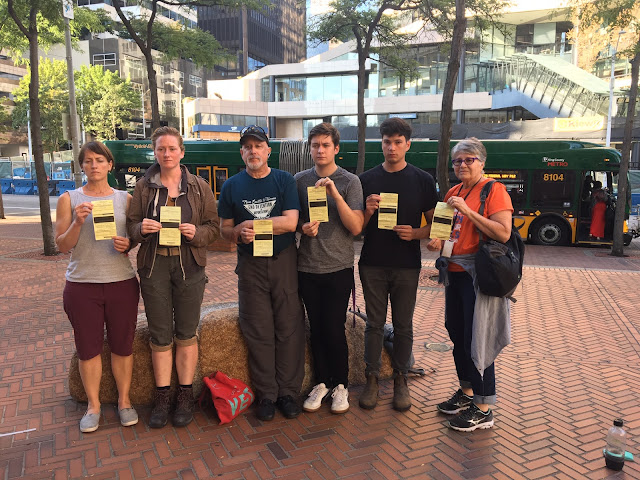 The six Tuesday vigilers arrested on August 6 for sitting in Sen. Cantwell's office waiting for her to respond
to the request made 35 days earlier that she visit the camps and hold a town hall forum on the abuses there.

Media & reporters, please contact Marla Zink, attorney for the defendants, at 360-726-3130 or marla@luminatalaw.com

Six Seattleites to be federally prosecuted for challenging

Six people, arrested in the Seattle office of Senator Maria Cantwell, will go to trial in U.S. District Court for the Western District of Washington at 700 Stewart St., Seattle, in courtroom 12B (12th floor), on Thursday, January 30th, 2020 at 9:30 AM.

On August 6, 2019 the six Seattleites – Dr. Howard Gale, Jennifer Gosar, Elizabeth Graham, M.Ed., Nikita Minkin, Nick Peda, and Jessie Yadlowsky – were arrested in Senator Cantwell’s Seattle office while waiting for her to respond to their unanswered request for her to take a more active and public role in ending the ongoing abuses of immigrants at US detention camps.

Gale, Gosar, Graham, Minkin, Peda, and Yadlowsky are being charged under 41 C.F.R. § 102-74.385 for failing to comply with the directions of officials.

The six were part of a larger group that had been asking Cantwell to travel to the border camps, make public the abuses occurring in the camps (through press interviews and a town hall forum), and to cutoff funding for the indiscriminate detention and deportation of refugees and asylum seekers. When arrested all of their requests had gone unanswered for five weeks. Despite the defendants, and the larger group, continuing to pursue these requests Cantwell has maintained her silence for 16 weeks now.

"My father survived the Holocaust because he found refuge in the U.S. It is unconscionable that my country is now not only denying sanctuary to those fleeing persecution, but it is also compounding their trauma by placing them in concentration camps. It is up to all of us, but especially those claiming to represent us in Congress, to make ‘Never again!’ have meaning," noted Gale, a child development research psychologist.

“As a Spanish language medical interpreter, I can attest to the cruelty, political persecution, violence, and dire conditions that force human beings to seek refuge,” said Gosar, a graduate student in social work at the University of Washington. Gosar, the sister of Rep. Paul A. Gosar (R-AZ-4), continued “government officials, including my brother, have done their best to dehumanize and criminalize real human suffering… this will not stop if our supposedly good senators remain quiet or make perfunctory and anodyne statements on twitter... Cantwell must investigate and speak out loudly and often about these abuses."

Graham stated “as a mother, grandmother, and a retired elementary school teacher and counselor, children have been at the center of my life for over 55 years… I know first hand the long term harm children suffer when facing the kinds of trauma and abuse they encounter in detention.” Graham continued “if Bob Ferguson [Attorney General of Washington state] could uncover widespread abuses of children at these detention facilities, simply by interviewing immigrant children now housed in our state, why can’t Cantwell do this on a national level?”

“The only crisis at the border is a crisis created through unnecessary detention and abuse… it is fundamentally a moral crisis” said Minkin, a University of Washington student and the son of refugees. Minkin continued “for eleven of twelve months of fiscal year 2019 there have been 811,016 southwest border apprehensions, yet for 25 of the prior 36 years that number was higher, with the year 2000 having more than double the apprehensions… it is our duty to hold Cantwell accountable for abuses committed in our name and with the tax dollars that they provide to perpetuate these human rights abuses.”

Peda, a recent graduate of the University of Washington now working with AmeriCorps, stated "it's more than past time for our elected officials to take action against the abhorrent human rights abuses that we are watching in real time… Cantwell needs to visit the border herself."

“I was adamant that Cantwell take action on this issue because I feel that the basic human rights of the people being held in these camps are being severely abused” said Yadlowsky, a local mariner. She continued “Cantwell is paid by us to represent us and our values… I want her to listen and take action.”

Contribute to the defense of The Seattle Six

Links for groups working to close the camps & protect immigrants: